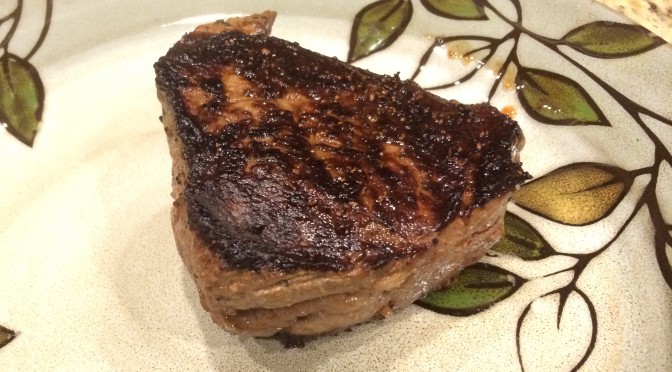 Sirloin steak was on sale at the grocery store, so I picked up a few pieces.  Mike has liked various recipes where you brown the steak to seal in the juices on the stove and then finish the steak in the oven.  He claims that this is what they do at steakhouses.  I’ve never watched the chefs at a steakhouse cook.

I’d recently made Chicken with Pink Sauce, and used Montreal Steak seasoning on the chicken.  The result was amazing.  I tasted the chicken prior to adding it to the sauce and it was incredible.  I never realized how delicious that seasoning mix was.  I don’t remember ever using it in a dish before.

I decided to use this to season my steaks instead of salt and pepper.  Although the steaks came out juicy and tender.

This style of cooking steaks can be quite messy if you don’t use a splatter guard (which I didn’t).  Practically the whole stove was covered in oil.  However, the results of this steak were totally worth it.  It’s much easier to clean the stove right after cooking, before the oil has had a chance to stick to the stove.

Baked for 7 minutes in oven 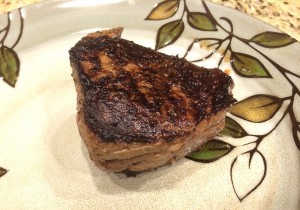 Adapted from The Hungry Mouse